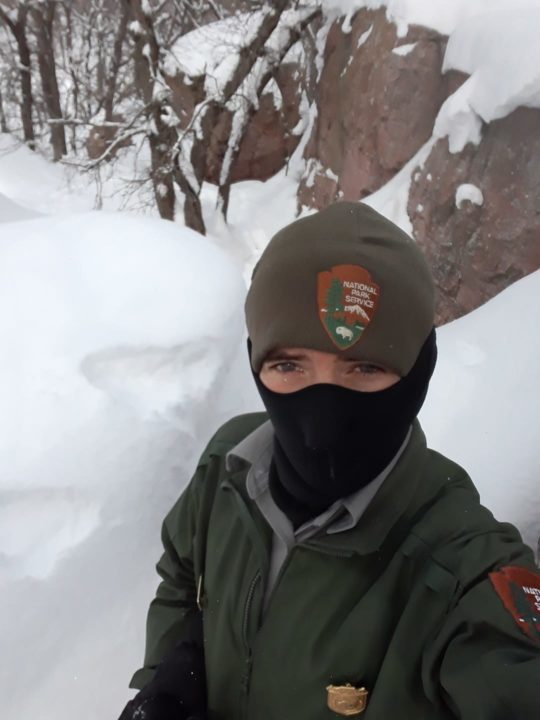 Our alumni are up to some amazing things! We reached out to Natalie Barber (MA 2014) to see what she's been up to since graduation. Natalie works for the National Parks Service and her work has taken her all over the country. Check out this great interview to learn more about her experience.

What about the program makes you want to pay it forward?

The program had a profound impact on me in terms of how I interpret history (90% of my job) and how I engage with people in terms of trying to understand where they're coming from. Working in a field that deals with thousands of people from all over the world, that has been a real saving grace more than once.

What’s a favorite memory from your time in the program?

I think it was more of a realization over the course of the program. Everyone is interested in the subject. When I told people I was getting my MA in Religious Studies, it always - without exception - started a long conversation in which I learned more about people than I had anticipated (or asked for, ha!). It was heartening to learn from so many people who shared my questions, had great insights, and brought new questions I hadn't thought of asking. A business major was one of the freshmen I taught while I was there, and he stopped me after class one day and summed it up really well. He wanted to vent his frustration because his family insisted he get a business degree, but (as he put it) "this" was the stuff he thought about all the time and this was the stuff that mattered to him the most. Since his family wouldn't support any other major, he said he at least wanted to minor in it so he could stay intellectually engaged with it.

What is something you learned in Religious Studies that you took with you after graduation/into your career?

Every NPS site has religious history infused into it, whether people are comfortable talking about it or not. It has informed the history of every site. Especially now - Pipestone National Monument is a spiritual site for countless Indigenous people around the country. The traditional practices and oral traditions are numerous, and my job as a lead ranger has largely been to build good relationships between the site as a government entity and individual Tribal members. If I hadn't had a background in Religious Studies, I think I would have floundered. When I first got here, one of the rangers was a historian and got really flustered with a Tribal elder whose story of his peoples' history was very different from the archeological and historical record. I was able to talk with him about the function of a story as opposed to its evidence. He only understood it as "we have evidence for 'A', therefore only 'B' is the accepted result." I could explain to him that the elder's story worked as a way to tell him "We've been here forever, this is our land, and we will tell you who we are - not the other way around." The ranger had no training for how to understand mythology as a way of saying something that is true for a group of people whether it literally is or not. I guess that's something I learned from Religious Studies, too - how to listen. It's not that easy when someone is saying something that is a challenge to hear.

What else do you want us to know? Words of advice, cool things about your life, etc.

I use what I learned in Religious Studies on a regular basis, and am always trying to expand on it - I'm grateful for my time there. I study the history that I talk about very differently than before I went into the program. I've been taking it with me from there in Georgia to NPS sites I've worked at in Washington, D.C., Kentucky, Minnesota, and in November to Sitka, Alaska. It's all been peppered with running road races around the country, learning to snowboard, picking up stone carving and woodwork, and road trips to the weirdest places I can find in each area. Not gonna lie though - I always miss Georgia 🙂